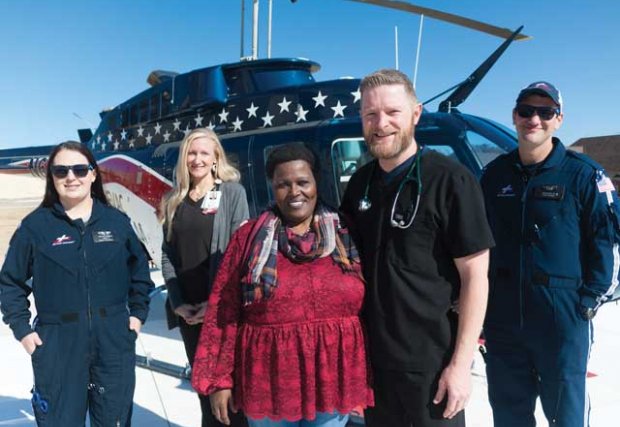 On August 8, Carol Dillard was out walking on the track in her Paris, Texas, neighborhood, when she suddenly passed out. People rushed to help her and called 911. When EMS arrived, they determined that she needed a level of care found an hour away – at Texoma Medical Center.

As paramedics were tending to Dillard, they noticed she had the classic symptoms of a stroke – facial droop, difficulty speaking and weakness on one side of her body, and then suddenly, they subsided. Because these symptoms were a possible indicator of a stroke caused by a large vessel clot, paramedics decided to bypass the local hospital and called Air Evac to have Dillard transported to TMC for more specialized treatment.

TMC Stroke Program Coordinator Jenny Reeves, BSN, RN, CNRN, SCRN, PCCN​, says in cases of clots, blockages and stroke, time is of the essence. “Stroke has a six-hour treatment window. Brain cells die every minute the brain is deprived of blood flow and oxygen, so the sooner the clot is removed, the better the chance of a good outcome for the patient,” she says. “TMC’s interventional suite offers advanced treatment of complex vascular brain pathology, such as aneurysm repair, arteriovenous malformations, carotid artery blockages, brain and neck tumors, intracranial hemorrhages, clot removal and strokes. We can quickly identify blockages and remove them,” she says.

While en route to TMC, flight medics radioed ahead and a “Code Stroke” was activated. Emergency Room physician Aaron Guess, MD, and his team mobilized to prepare for Dillard’s arrival. However, by the time she landed at TMC, her symptoms seemed to have resolved. Dillard was immediately taken to the CT suite, where Dr. Guess advised that they do a CT scan and a CTA. “A CTA is similar to a CT, but dye is used to help determine where the clot is,” explains Reeves. “We could see on the screen that the clot had become lodged in her brain, and that is when her symptoms returned. Dr. Guess made his decision based on her symptoms and the reports he received from paramedics and the flight team. It played a major role in time efficiency and making sure Ms. Dillard was treated quickly and appropriately.”

Dillard was quickly taken to the neurointerventional lab, where Interventional Neurologist Vivek H. Tank, MD, successfully removed the clot. After the procedure, she was moved to ICU, free of all stroke symptoms. She also did not have any side effects from the stroke and did not need any rehabilitative therapy.

Dillard’s patient experience was amazing from beginning to end. She says that the Air Evac medics took great care of her during her flight to TMC, and the doctors and nurses at TMC were incredible. “I am so grateful to everyone who helped save my life. They all knew what they had to do and it all worked out,” says Dillard, who highly recommends TMC to anyone who needs to go to a hospital. “I am glad they made the decision to bring me here to TMC. I am so fortunate.”

In addition to her duties as the Stroke Program Coordinator, Reeves explains that she also reaches out to local and regional EMS and helicopter companies about TMC’s capabilities. “Because we have the neurointerventional suite, we can receive patients with large clots via ambulance or helicopter. The more people who know about what we can do, the more lives we can help save,” she says.

TMC is certified as a Primary Stroke Center by The Joint Commission, a recognition considered to be the gold standard for stroke patient care. We have also been designated as a Level II Primary Stroke Facility by the Texas Department of Health Services, and earned the American Heart Association/American Stroke Association Get With The Guidelines®-Stroke GOLD PLUS with Honor Roll Elite Plus.