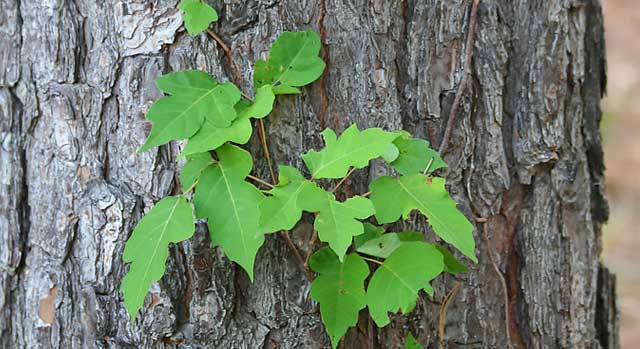 These plants are the most common causes of skin rash among children and adults in the United States and Canada. The rash consists of painful and long continued swellings and eruptions and is caused by an allergic skin reaction to urushiol oil found in the leaves, stem and other parts of the plants. Urushoil oil stays active on any surface for up to five years. Even dead plants in underbrush can transmit the toxic oil to your skin! Exposure to the oil occurs through any of the following:

Poison Ivy — can be found growing as vines or shrubs, predominantly east of the Rocky Mountains. The leaves are often clustered in groups of three, and will either have smooth or notched edges.

Poison Oak — is more common west of the Rockies. It usually grows as a small bush, but sometimes as a climbing vine. Its leaves are smooth-edged and cluster in groups of three, five or seven.

Poison Sumac — grows exclusively in very wet or flooded soils such as those found in swamps and peat bogs. It’s been known to grow as far west as Idaho, but is most commonly found on the east coast, especially in wet areas of the southeast. The leaves are generally smooth and oval-shaped, with seven to 13 growing on each stem.

Learning to identify these plants and avoiding exposure is the best way to prevent an allergic reaction:

For more information on plants and tips on poison-proofing your home, visit www.poisoncontrol.org.

There were no results for your search.
ER Wait Time