“The Care is So Compassionate, It Feels Like Home” 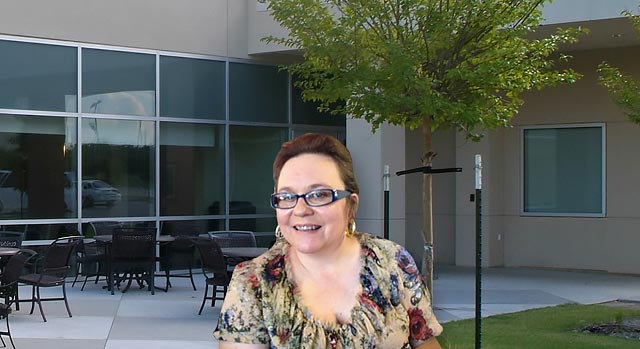 With multiple sclerosis and symptoms that flare up about every five years, Beth Maples depends on the Reba McEntire Center for Rehabilitation.

Beth Maples, 59, from Calera, Oklahoma, has been living with multiple sclerosis (MS) since she was in high school. A central nervous system disease where the flow of information within the brain is disrupted, MS can cause a range of symptoms. For Beth, these include tingling and weakness in the arms and legs, clumsiness, vision problems and incontinence. The first time she went for help at the Reba McEntire Center for Rehabilitation was in the 1990s.

“I received awesome care,” she says. “The staff was willing to go above and beyond, and I got to know everyone quite well. It became my second home.”

That familiarity and comfort was especially important to Beth in 2014. She had spinal fusion surgery in October that year for two vertebrae that were pressing on her spine. Around the same time, her mother passed away, and the stress triggered an MS flare-up. Beth’s recovery was complicated by depression.

“When I got to rehab, I couldn’t do anything. They had to put me into bed and change my clothes,” says Beth. “My mother had always been there to encourage me.” Beth’s rehab program was individualized for her condition. She was able to walk by moving between two parallel bars, with staff on three sides of her for support. She did exercises to strengthen her arms and upper body, and worked out on a cross-training machine to exercise her legs. Beth, who has been using a wheelchair for about five years, also did exercises with her therapists in the heated pool.

Through the compassion and reassurance of the staff, she was ready to go home in January 2015 after almost four months. While it was good to be home, she says that it was an adjustment not having her mother there to support her. The staff at Reba Rehab stepped in to help. They made sure Beth had some equipment at home for assistance, and they called her often to see how she was doing. “The people at Reba Rehab are wonderful. They taught me to have confidence and strive to do better every day,” says Beth. “I learned that life is worth living, even with a disability.”