Returning to Service After Neurosurgery 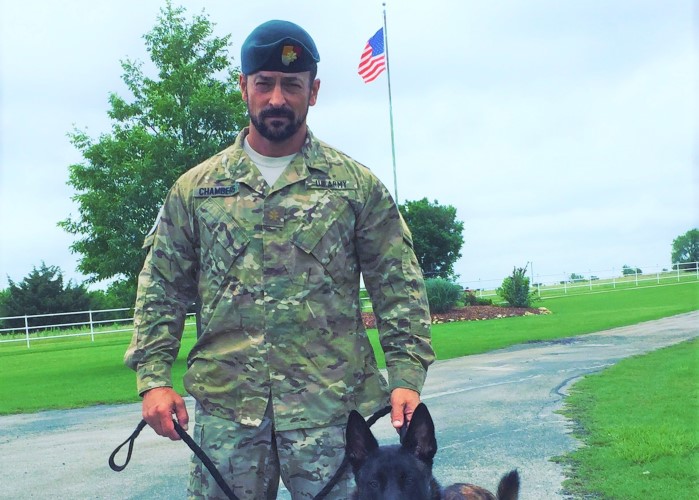 In 2004, Lt. Col. Peter Chambers became a Special Operations Surgeon for the Green Berets, the first person to ever earn the position. He is a 37-year combat veteran and Purple Heart recipient who has completed 12 deployments in his military career.

After an equipment failure during a parachute jump in 2012, a high-speed landing caused a compression fracture in his spine, a common injury in his line of work. He continued performing parachute jumps as part of his military training and duties, and his injury and the pain resulting from it worsened with each landing.

Lt. Col. Chambers received various forms of treatment through the Department of Veterans Affairs, including steroid injections, oral medication, numerous rounds of physical therapy and stem cell therapy. These treatments helped alleviate the pain for a time, but he understood that they were temporary measures.

Over time, Lt. Col. Chambers’ injury grew so severe that he had to keep his left arm in a sling because letting it hang freely caused him excruciating pain. “When a nerve is pinched in the upper region, distribution goes through your arm all the way to the fingertips,” he explains. “The pain is not like a sore muscle. It’s a burning pain like when your leg goes to sleep.”

Lt. Col. Chambers could no longer face forward without putting pressure on the nerve and had to turn right to look at someone. All activities of his daily life had to be put on hold. He could no longer perform surgery or exercise, and the forced inaction was beginning to cause muscular atrophy.

Putting his personal and professional life on hold also had a psychological impact on Lt. Col. Chambers. “When you sideline anyone running at a high level, whether you’re a Green Beret or an athlete, it causes depression; it’s hard on the psyche,” he said of the experience.

Taking Matters Into His Own Hands

Realizing his condition would require surgery, Lt. Col. Chambers went to his primary care doctor for a referral to a specialist. A week later, he made a 10-hour drive from the U.S.-Mexico border where he was stationed to see Abdul Baker, MD, a neurosurgeon at Texoma Medical Center.

Dr. Baker quickly understood that Lt. Col. Chambers was suffering from cervical radiculopathy, a condition in which a nerve in the neck that supports strength and sensation to upper extremities comes out of the spinal cord. “When badly compressed, it impairs function and causes profound weakness, sharp shooting pain and lack of sensation other than pain,” says Dr. Baker.

A Surgeon Who Knows His Stuff

Lt. Col. Chambers, a surgeon himself, could immediately tell he was in good hands. “Dr. Baker has the knowledge of three neurosurgeons in one. He was very personable and factual and gave great informed consent,” he recalls. “He exuded confidence and competence without seeming arrogant.”

Dr. Baker determined a cervical fusion was necessary, and he quickly had Lt. Col. Chambers scheduled for surgery. “The procedure is done from the front of the neck and takes around 35 minutes. We remove the herniated disc causing compression and make sure the nerves and spinal card are widely decompressed,” Dr. Baker explains. “We then add a cage where the disc was and bind the bones together to allow it to heal.”

Finally Free From the Pain

Waking up from surgery, Lt. Col. Chambers was amazed to find he had full functionality. His sharp, shooting pain was gone and he had regained all sensation in his arm. He is back to performing his military duties, although he is patiently awaiting the OK from Dr. Baker to resume parachute jumping.

Looking back on the care he received at TMC, Lt. Col. Chambers says, “I would 100% refer Dr. Baker and I already have many times. From the top down, everyone there was very helpful, especially considering doctors can be difficult patients. Great rapport, great attitudes; I have nothing negative to say at all.”