Robotic Surgery for Gynecologic and Other Disorders 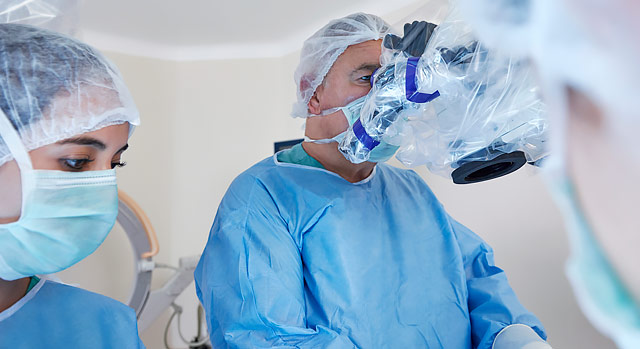 For some women, robotic gynecologic surgery may be a good alternative to open surgery or standard laparoscopic procedures. Open gynecologic surgery, in which a large incision is made in the abdomen so a surgeon can access the uterus and surrounding anatomy, has been the standard approach to gynecologic procedures for years. However, open surgery can cause significant pain, physical trauma and a long recovery process. The potential advantages of laparoscopic and robotic-assisted laparoscopic hysterectomy and other gynecologic procedures over conventional open surgery include smaller incisions, which may result in less post-operative pain, reduced blood loss and less need for blood transfusions, and a potentially faster recovery and return to normal activities.

Hysterectomy is the removal of a woman's uterus. A hysterectomy may be recommended for a number of conditions including cancer, uterine fibroids (non-cancerous tumors), endometriosis, chronic pelvic pain or abnormal vaginal bleeding. A robotic hysterectomy with the da Vinci Surgical System allows doctors to perform precise, minimally invasive procedures with a few small incisions in the abdomen.

In some cases, only one incision — in the navel (belly button) — is made to remove the uterus. Known da Vinci® Single-Site® robotic surgery, this is a refinement to the standard da Vinci system. Because there is only a single, small incision, patients often experience less trauma to the body and less blood loss during the procedure surgery. This means they may recover more quickly and return to work and daily activities faster than they would with conventional surgery.

A robotic myomectomy procedure can be used to remove uterine fibroids while preserving a patient's uterus. Fibroids are non-cancerous tumors that grow within or outside the uterus and can contribute to infertility and miscarriages. After using the da Vinci Surgical System to remove each fibroid, surgeons carefully repair the uterus to minimize potential bleeding, infection and scarring.

Treatment for gallbladder disease generally includes lifestyle and dietary changes and medication. However, in some cases, doctors recommend cholecystectomy, which is surgery to remove the gallbladder.

Although minimally invasive cholecystectomy has been used for several years, a new surgical refinement, in which only one incision - in the navel (belly button) - is made to perform the surgery. Because there is only a single, small incision with da Vinci® Single-Site® robotic surgery. Patients often experience less trauma to the body and less blood loss during the procedure surgery. This means they may recover more quickly and return to work and daily activities faster than they would with conventional surgery.

A hernia happens when part of an internal organ or tissue bulges through a weak area in the belly wall or groin. A combination of muscle weakness and straining, such as heavy lifting, may cause hernias. Some people are born with hernias or with weak abdominal muscles and some people have a family history of hernia. Surgery is considered the only way to permanently fix a hernia. Surgeons at TMC use the da Vinci Surgical System to correct hernias so patients have less post-operative pain and a quicker recovery.

A colon resection surgery, or colectomy, is performed to remove sections of the large intestine that have become diseased from colon cancer, diverticulitis, infection, or other conditions. During the surgery, the diseased section is removed and then the healthy parts of the bowel are reconnected. Small incisions are made in the abdomen and a scope and surgical instruments are inserted to perform the procedure.

Individual results may vary. There are risks associated with any surgical procedure. Talk with your doctor about these risks to find out if robotic surgery is right for you.

If you need a referral to a surgeon or other physician at Texoma Medical Center, call our free physician referral service at 1-903-416-3627.